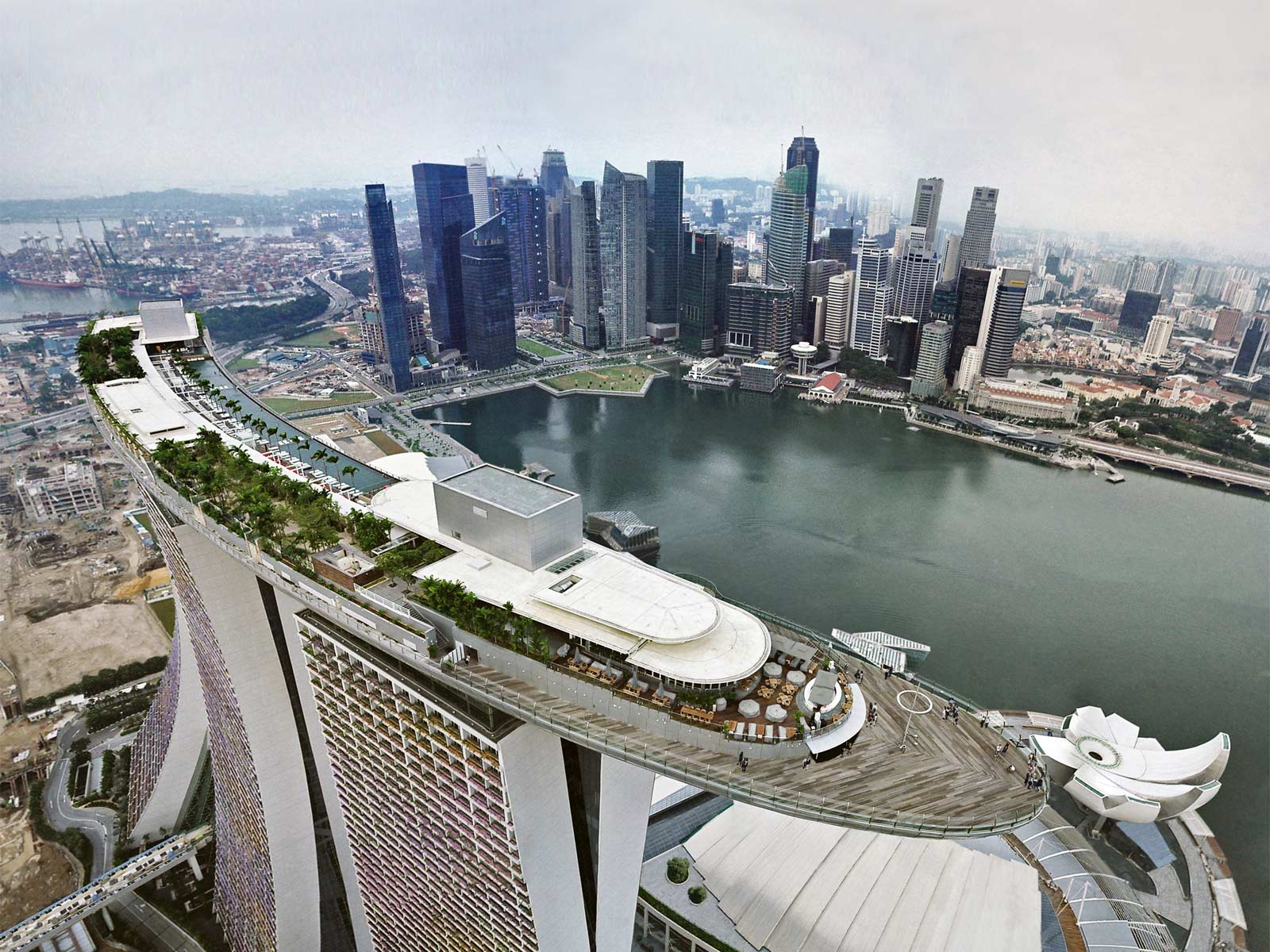 Ever since its grand opening in 2010, this incredible three-towered building that sits on the reclaimed land in southern Singapore known as Marina Bay has wowed visitors and locals alike. But aside from its shiny exterior and its “boat” on the roof, what else can be found at Marina Bay Sands?

Marina Bay Sands is an integrated resort fronting Marina Bay in Singapore. Developed by Las Vegas Sands, it is billed as the world’s most expensive standalone casino property at S$8 billion, including the land cost. The design of the building is known to be the most photographed building in the world, ahead of even the Burj al Arab in Dubai.

It can be quite hard to navigate your way around MBS (especially in the Shoppes) so having a handy map with you means that you can get a head start on the crowds and discover exactly what you want, without having to follow the masses! What a lot of people don’t realise, however, is that the hotel is actually across Bayfront Avenue, whereas the Shoppes and the rest of the entertainment at MBS are closer to the Marina (where you even hop on Water Taxis to take you up the Singapore River to Clarke Quay and Robertson Quay). 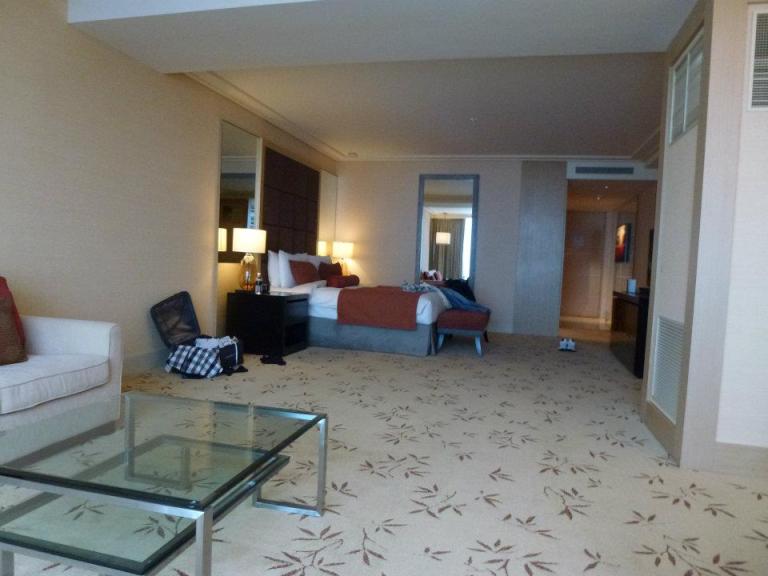 For many people, Marina Bay Sands is principally known as a hotel, and a luxury one at that. I first stayed in the hotel in October 2011 (further reading: Why Marina Bay Sands is my favourite hotel) and the rooms are certainly not cheap. You can expect to pay around £200-250 per night for the Deluxe Rooms with garden view, and slightly more for the Deluxe Rooms with city view. Even though you can see the ocean from the garden view side, at MBS the city view is the more expensive as it overlooks prime real estate around Marina Bay itself – and believe me, at night this view is stunning!

The SkyPark has the world’s longest elevated swimming pool, situated 191 metres above ground (further reading: Swimming in the Sky at Marina Bay Sands). The pools are made up of 422,000lbs of stainless steel and can hold over 350,000 gallons of water. The SkyPark also has rooftop restaurants such as The Sky on 57 (by Justin Quek), nightclubs such as KU DÉ TA, The Club facilities, gardens, hundreds of trees and plants, and a public observatory deck on the cantilever with 360-degree views of the Singapore skyline.

The Shoppes at Marina Bay Sands have close to 1,000,000 square feet of retail space with over 300 stores and F&B outlets, with boutiques such as Ralph Lauren, Chanel, Cartier, Prada, Gucci, Hermès, Emporio Armani, Chopard, REDValentino, Dior, Dunhill, Vertu, Miu Miu, Saint Laurent Paris, Salvatore Ferragamo, Montblanc, Blancpain, an Hermès watch boutique, and Herve Leger. A canal runs through the length of the Shoppes, in the same style as the Venetian in Las Vegas. Sampan rides on the canal are available for guests and shoppers at the shopping mall, similar to the gondola rides available in the Venetian.

Restaurants and bars make up a large reason to visit Marina Bay Sands. Even in the hotel lobby, you can find great places to eat, such as the Rise Lobby Bar and the Rise Lobby Restaurant, Jin Shan, and Adrift by David Myers (not to mention a favourite hangout of mine Sweetspot, which sells amazing cheesecakes and macarons). Situated within the Shoppes are the five of the six Celebrity Chef restaurants: Cut (by Wolfgang Puck), Waku Ghin (by Tetsuya Wakuda), Pizzeria Mozza and Osteria Mozza (by Mario Batali), Guy Savoy (by Guy Savoy), and DB Bistro Moderne (by Daniel Boulud). Elsewhere, you can find Bread Street Kitchen by Gordon Ramsey and so much more!

The Casino at Marina Bay Sands is a very highbrow affair, and usually photography within the casino floors is prohibited, as the management like to create the image of a professional gaming atmosphere, rather than a tourist destination. However, for foreigners, entry to the casino is free (but you need your passport, no exceptions). Singaporean nationals have to pay an entry levy. Further reading: Put your money where your mouth is.

If shopping or gambling are not your thing, then why not see what’s showing at the Marina Bay Sands Theatre? There is usually always something of international recognition showing here, and in the past there has been performances of Disney’s The Lion King and the Wicked musical. Shows change every couple of months, though, so it’s best to check what’s going to be on during your visit.

What many people not know is that that Marina Bay Sands has an incredibly large Expo Centre (exhibition space) which plays host to festivals and showcases all year round. While admission to the general public is not usually free, you can still book in advance if something you fancy is taking place. The corporate side of MBS is apparently very lucrative, and a lot of money is earned – and spent – in the Expo. Depending on the subject of the exhibition, you could see sports cars, waxwork dummies, new kitchens, or even the latest fashion being modelled on a catwalk. The Expo at MBS simply has it all!

Gardens by the Bay is not owned by the Sands Corp per se, but as it is effectively connected to the hotel lobby by a bridge over the East Coast Parkway (ECP), it is wise to include it in this blog. You can really lose yourself here at the Gardens by the Bay, and in fact it is so new that things are still being added all the time, so every visit is a different one (further reading: Singapore’s incredible Gardens by the Bay). Make sure you check out the Cloud Forest Dome and then grab a bite to eat from Satay by the Bay – the Gardens’ own hawker centre with views of the Marina Barrage.

The architecture is said be a form reminiscent of a lotus flower and was designed by architect Moshe Safdie. Referred to as “The Welcoming Hand of Singapore”, the ArtScience Museum is anchored by a round base in the middle, with ten extensions referred to as “fingers”. The design concept for each finger denotes various gallery spaces sporting skylights at the “fingertips” which are included as sustainable illumination for the curved interior walls. The ArtScience Museum has 21 gallery spaces with a total area of 50,000 square feet

Wonder Full is a night time multimedia spectacular located in the Marina. Lasers emanate from the towers of the hotels and shine across the whole marina. The show starts off with a single drop of water, representing the birth of life. It later stages through important stages of the person’s life such as childhood, development through age and adulthood. The best place to watch Wonder Full would actually be from the SkyPark (while you’re having a swim!) but if you can’t afford that then standing in Merlion Park around One Fullerton complex on the opposite side of the marina will give you the very best views.