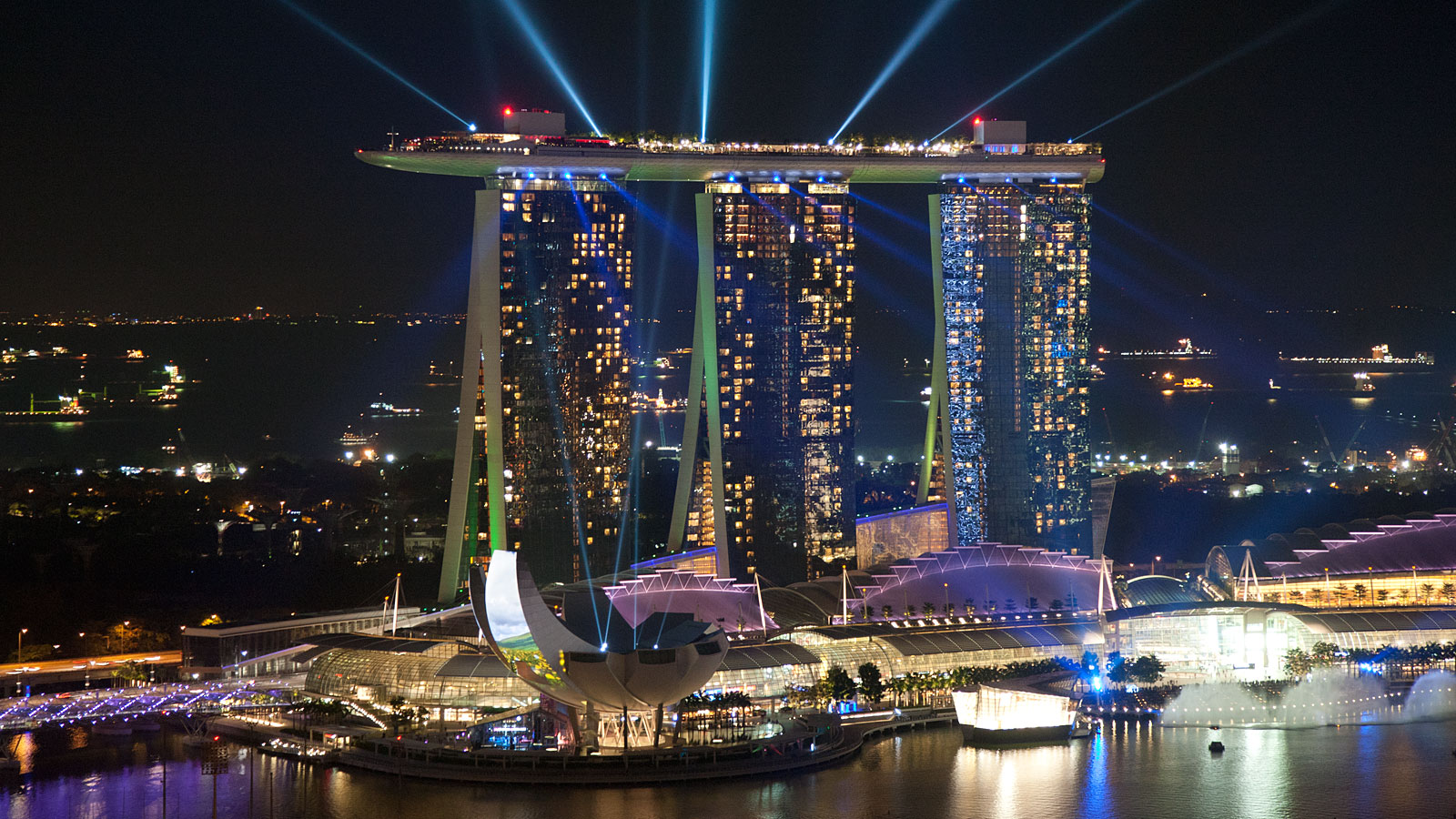 Marina Bay Sands is an iconic hotel situated on reclaimed land just south of Singapore’s Downtown Core. The whole area is now termed Marina Bay, and from this the hotel gets its name. The hotel is owned and operated by the Sands Group, which also has luxurious properties over in the US and in Macao.

The three 200 meter towers of Marina Bay Sands hotel each rise to 55 stories, with the famous infinity-edge swimming pool floating on top across the towers being for hotel guests only. The hotel was built for around $6b and opened late in 2010. As well as the 2561 hotel rooms and suites – including some “secret” suites that are not available to the general public – Marina Bay Sands is also home to a popular convention centre, an art-science museum, one of only two casinos in the whole of Singapore, and 800,000 sq ft of retail space in the luxurious ‘Shoppes at Marina Bay Sands’.

I have had the good fortune to stay at Marina Bay Sands on many occasions, the first of which was in 2011. On that occasion, I spent 3 nights in a Premier Room with City View. On further stays at MBS, I have been in the Deluxe Rooms facing the Bay, which are the cheapest rooms available, and most of the photos below are from that room.

There’s no doubt MBS is a big place, but you must remember that the hotel is just the tip of the iceberg. There’s also the Shoppes, which I recently ranked as the 4th best shopping mall in Singapore, and the 24/7/365 casino, which is almost an attraction in itself. The Gardens by the Bay are also accessible from Marina Bay Sands, via the bridge from where the above photos were shot. Many tourists who are not hotel guests can walk across the bridge and get a good spy on the hotel guests who are eating at the Rise Restaurant and lobby bar. 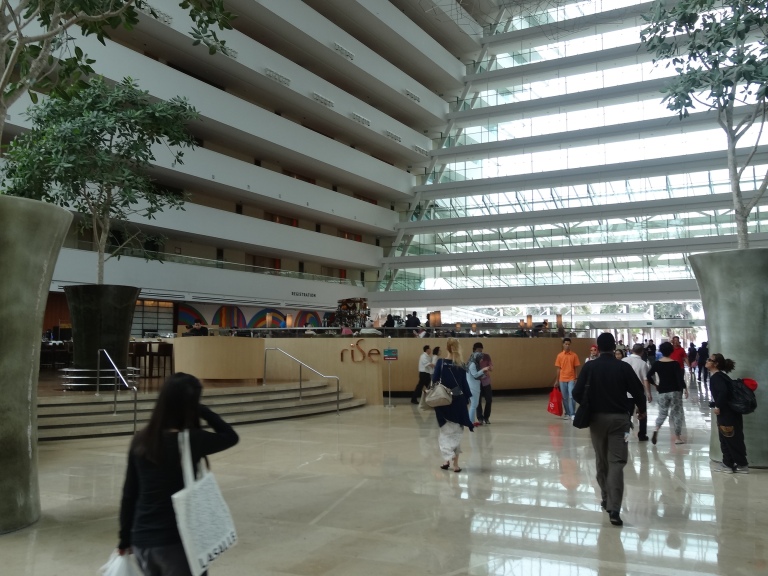 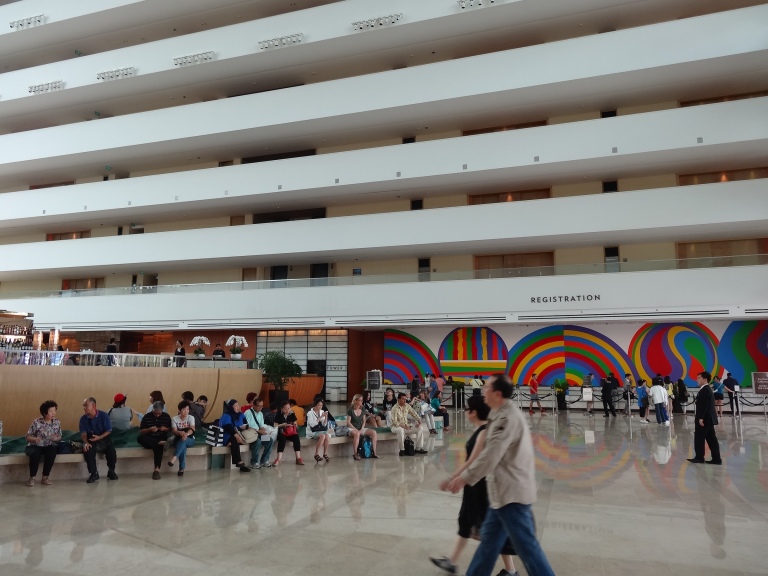 Marina Bay Sands has come under a little scrutiny for being a big hotel. There are over 2500 rooms in the hotel and the lobby downstairs is something of a tourist attraction, with guests walking around with their video cameras. However, my feeling is that guests do not spend time in the lobby, we are too busy enjoying our rooms, the celebrity restaurants, and of course the amazing SkyPark and infinity pool on the roof, 57 floors up, which is only available to hotel guests. I always check in at Tower 1, even if my room has been allocated in advance in Tower 3, but you would do well to remember that there are check in counters at both ends of the hotel.

For most people, a simple bed (and TV, of course) and a walk-in rain shower are more than enough when staying for a few days at Marina Bay Sands. The Deluxe Rooms give you all that and more! The Housekeeping Team arrive every morning to clean and tidy your room, and in my experience they have always done an immaculate job. If you don’t want your room tidied while you are away, then remember to put on the ‘Do Not Disturb’ sign near your door. Now, as this is a luxury hotel, you will not find paper signs that hang from the door handle! Instead, it is all done electronically at the touch of a button!

Apart from the slightly larger size, the only other real difference between a Deluxe room or a Premier room is the addition of a bathtub and sofa in the more-expensive Premier rooms, which you can see in the photos above, and as you can see the rooms are well-stocked with toiletries and towels, so no need to bring them with you! There is an iron and ironing board in the wardrobe if you fancy doing some housework on your staycation!

At Marina Bay Sands Hotel, the more expensive views from the rooms are considered to be facing the Marina and the CBD. The slightly cheaper rooms are facing the Bay with the Gardens by the Bay below you and the Malacca Strait ahead of you. With the Bay view rooms you get a nice small balcony, whereas the city view rooms have floor to ceiling windows. So the choice is yours. 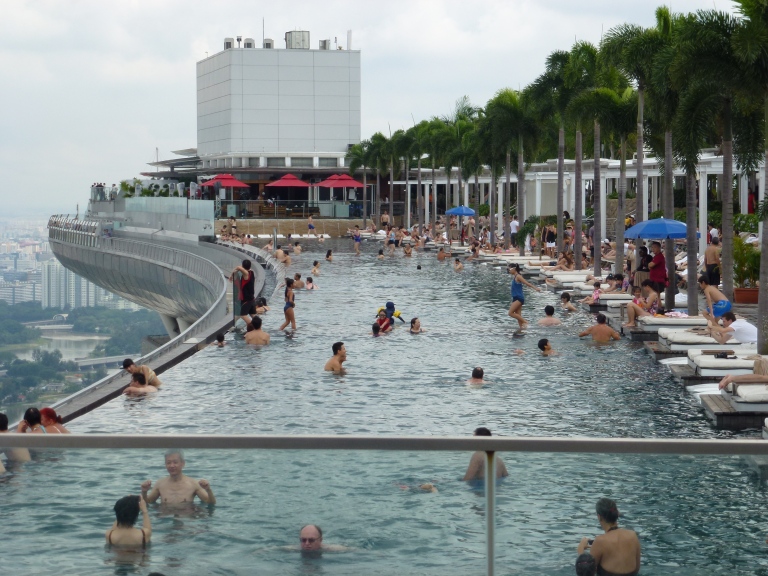 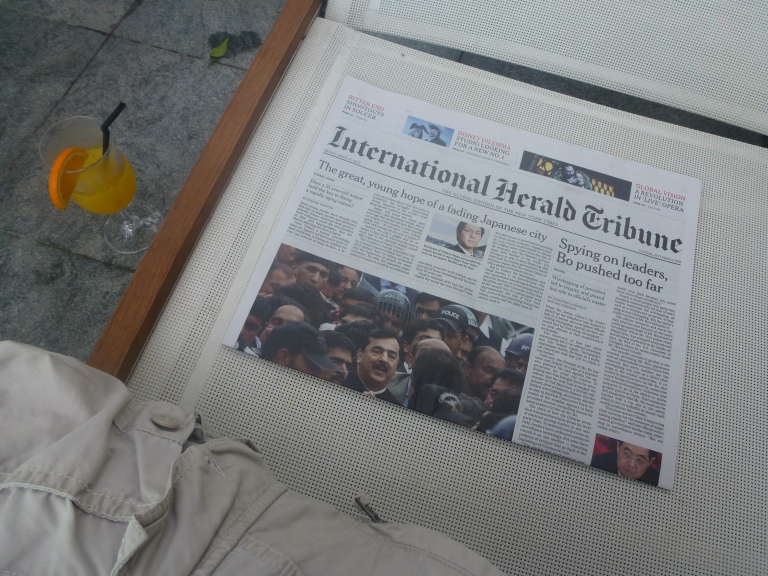 Towels and distributed for free on the SkyPark, although in busy times in the afternoon and evening, it may be difficult to find a spare sun-lounger beside the pool or at the back on the sunbathing platforms. This is why I do most of my swimming and pool-lounging in the mornings, before the crowds wake up. Food is served up here on the SkyPark from 10am onwards, and you do not need to have cash, as you can just charge the snacks and drinks to your room bill. Free water is available from the Towel Concierge desk, as well as international newspapers such as the Straits Times (first come, first serve).

I won’t spend too much time here talking about the SkyPark, as I have blogged about it in a separate post. You can read all about my experience swimming in the sky in the MBS Infinity Pool (with many unique photos).

In all my time at Marina Bay Sands I have never encountered a problem: check-in has always been efficient in my experience, and bottled water distributed by staff as we wait; all staff within the hotel are courteous and polite; the housekeeping team are immaculate in what they do; taxis are readily waiting for you outside the hotel; the in-room complimentary wifi is high-speed and ultra-reliable; in-room dining is delivered to your room very promptly in a professional manner; and I haven’t even mentioned the benefits of the glorious Sands SkyPark, which is arguably the main reason you will want to stay at Marina Bay Sands, anyway!

It is always with a heavy heart that I check-out of Marina Bay Sands. I have spent a grand total of 21 nights there so far, and I plan to return later this year. I just cannot get enough of the place! I will report back when I have more stories to tell, but in the mean time, check out this additional blog on MBS from Peonies and Pancakes and this amazing gallery of pictures from a family experience at the hotel from Fun Family Feats!

21 thoughts on “Why Marina Bay Sands is my favourite hotel” 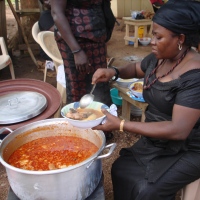