Savannakhet is located in the central parts of Laos on the banks of the Mekong River. It is around a 6 hour drive from Vientiane, and this road trip is an opportunity to view the spectacular Mekong scenery along the way. On the other hand, the city can also be reached across the border via the Thai-Lao Friendship Bridge from Mukdahan, Thailand.

Savannakhet is the second largest city of Laos and home to various ethnic groups including Laotian, Thai, Chinese, and Vietnamese. The city features a number of tourist attractions like the famous sacred Buddhist site of That Ing Hang Stupa, and most the town’s architecture is strikingly French Colonial. The National Provincial Protected Area at Dong Natad has a diverse wildlife population and offers eco-tours for lovers of nature.

Although, Savannakhet and its surrounding areas have not developed as rapidly and prosperously as Vientiane and Luang Prabang, it is one of the country’s most popular provinces for communication and commerce. The province acts as a commercial buffer zone between Thailand and Vietnam and is a very active location for trade between neighbouring countries. Along with the border crossing with Thailand at Mukdahan, it is very popular for travellers to stay in Savannakhet enroute to the Vietnamese border at Lao Bao. 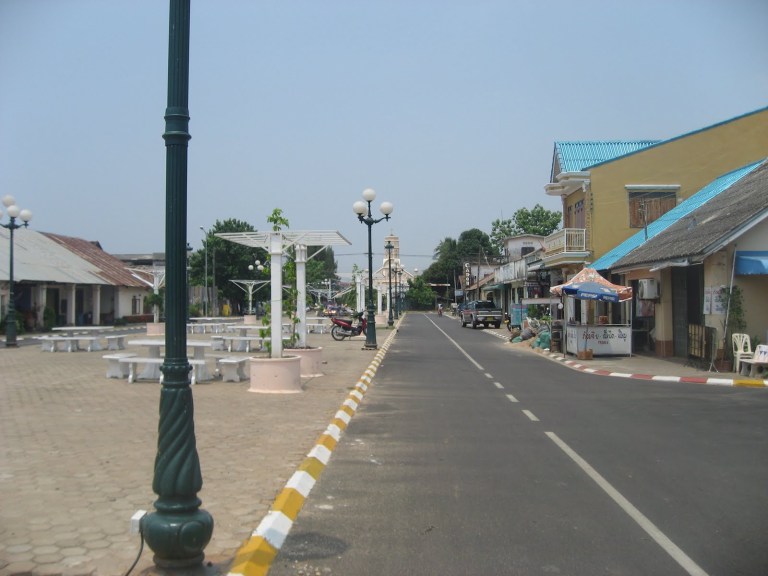 The city of Savannakhet is easy to explore on foot but tuktuks are also available – the drivers of which will eagerly take you quickly to attractive sites around the city. Savannakhet’s Vietnamese temples and Catholic churches located around the city are worth visiting. Some more fascinating sites to check out include: the Khmer ruins at Heuan Hinh (Stone House), Wat Xayaphoum, and the Dinosaur Museum. An exciting adventure on dirt paths along the Laos and Vietnam borders, the Ho Chi Minh Trail tour is also worth checking out. The Tourist Office in Savannakhet also offers a wide variety of local walking tours and eco-tours, which will be a great way to explore this quiet colonial place.

The people of Savannakhet definitely contribute to the atmosphere of the place. Many local women wearing Vietnamese hats can be seen walking the streets and riding on bicycles, and you could be forgiven for thinking this was a small town near Hoi An or Danang. Yet nothing beats a Lao Massage after a tiring day, even if it was just after some people-watching, and these can be found at many places around the city – sometimes in the most unlikely of places (i.e. the local hospital)!

Although Savannakhet has a handful of tourist attractions scattered around and in between the colonial buildings, its main strength actually lies in eco-tourism, especially trekking through its provincial protected area, Dong Natad. A journey through remote villages is an unforgettable experience. Aside from observing wild animals in the forest, visitors will learn about herbs and forest flora that villagers use for various purposes.

The masses of tourists either stay in the north of Laos or venture right down south to the city of Pakse and the Bolaven Plateau. Rarely do tourists come to the centre of Laos to see sleepy Savannakhet. In terms of its location on the map, the city really is isolated, and you can see from the architecture here that very little has changed in the past century!

One thought on “Savannakhet: Isolated in location, frozen in time”