It was 2012 that Korean Air took their first delivery of the Airbus A380. Flights to Japan and Hong Kong prevailed until the airline felt comfortable enough to fly longhaul across the Pacific Ocean to important destinations. Since then, more and more people have enjoyed what is undoubtedly one of the finest first class products in the sky.

As with most A380 airlines, Korean Air place their first class suites (known as Kosmo Suites in the Korean Air parlance) at the front of the lower deck. Of course, we all know the A380 has 2 decks, and it is on the upper deck where spacious business class seats are situated. The rest of the lower deck (behind first class) is dedicated to the cheap seats – around 400 of them!

Ever since Korean Air had installed the A380 into their fleet, I had wanted to experience their first class Kosmo Suites. After experience with Emirates and Singapore Airlines in their A380 suites, it was a nice comparison to make with Korean Air. The interior of the first class cabin was nice, with refined colours, a nice temperature, and trademark professional service from the crew.

The absolute highlight of anybody’s first class trip with Korean Air should be the chance to utilise the public bar during flight. Most A380 operators, including Emirates, Etihad, and Qatar Airways, have a bar of some kind for first class passengers (and for business class passengers in Emirates’ case), but Korean Air certainly raised the bar when they introduced the Celestial Bar on their A380s a few years ago. There may not be much different in terms of product to their rivals, but it’s the presentation that makes it so attractive. Vaguely decorated (or should that be lit) in Korean Air’s corporate colour scheme, the Celestial Bar aboard the Airbus A380 is THE place to spend some time during your flight across the Pacific (Korean Air currently fly the A380 to both Los Angeles and New York). There is ample seating areas with plenty of reading material to wile away those hours, and of course, a friendly stewardess is only a simple call away for yet another complimentary cocktail. 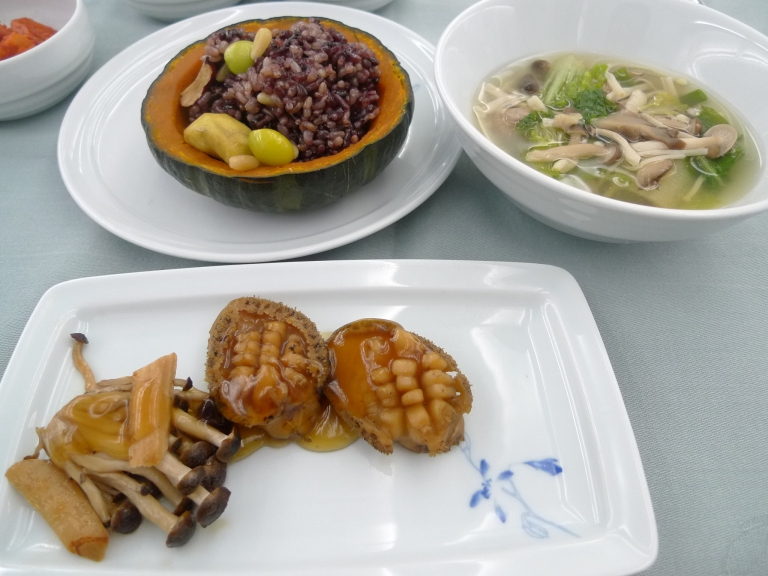 Provided you don’t drink to much in the Celestial Bar, meal times are always something to look forward to when travelling first class in the Kosmo Suites with Korean Air. I have always found Korean Air’s premium catering to be among the finest in the skies, and I have never been disappointed (not even when travelling in economy class!). When flying longhaul across the Pacific, you can choose when you want your meals, so it does not interrupt any sleep you may need during the flight.

When comparing to other airlines whose fleet includes the A380, Korean Air perform very highly. In fact, only Etihad and Singapore Airlines perform more consistently than Korean Air, but that’s certainly no criticism. It is, if anything, an amazing compliment to be ranked among such esteemed company. Yet with Europeans in particular perhaps missing out on Korean Air’s pride and professionalism, it seems that the airline goes under the radar most of the time. This is actually something of a good thing (though maybe not economically) for Korean Air, as they are really in a no-lose situation, as naïve passengers book their flights without knowing what to expect, yet when all is said and done they will all probably be in unanimous agreement that Korean Air have for first class travel in the Far East Asian region raised the bar – and not just the Celestial Bar!

5 thoughts on “The Korean Air A380: Raising the Celestial Bar”