It is possible to find many different kinds of street foods around South East Asia, but very few, if any, are as much of a work of art as the Suman that you can find in the Philippines. Sometimes eaten as a dessert, this glutinous rice snack really brings the creative side out of the people who sell it! 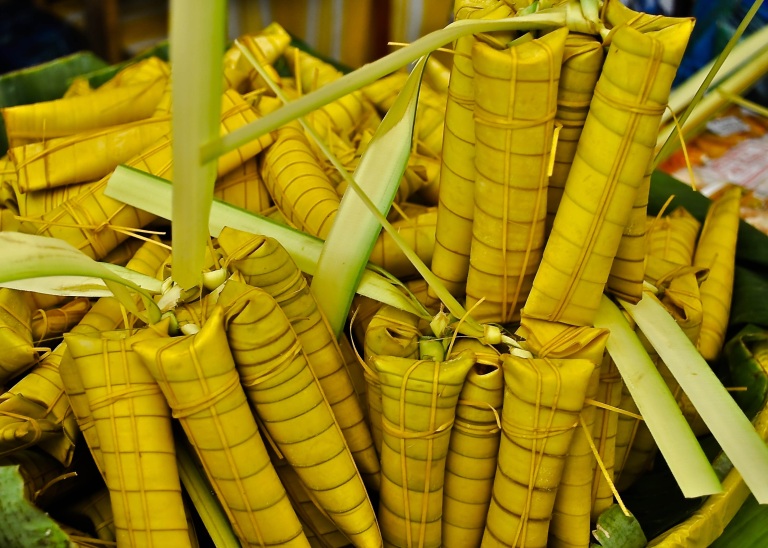 Suman is made from glutinous rice cooked in coconut milk, and often steamed wrapped in palm leaves – often in quite artistic and intricate ways! It is usually eaten sprinkled with sugar. Suman is also known as “budbod” in some of the Visayan languages in the country.

Suman wrapping is a unique art in itself, and can be traced to pre-colonial roots which have had contact with Indian traditions. Wrappers utilize a wide variety of indigenous materials such as palm, banana, anahaw and bamboo leaves, coconut shells, and others. Some wrappings are simple folds, resulting in rectangular suman. Others are in vertical coils, giving it a tubular form, while yet more others are in pyramid-like shapes. Some forms of suman are eaten like ice cream–with cones made from banana leaves, and still others are in very complex geometric patterns. Some are woven into the shape of a banana blossom or a complex octahedral star.

I am reminded quite a bit of otak-otak from Malaysian cuisine when I look at the appearance of suman, but the taste is very much different. There are quite a few glutinous rice snacks around South East Asia, including many in Thailand, such as khao tom mat (which is a favourite of mine). But as far as eating out in the Philippines goes, suman is one of the best snacks to have, and if eaten as dessert (as I did) then it can taste even better with the addition of sugar, syrup and other condiments!

7 thoughts on “Suman: A Filipino Artform”