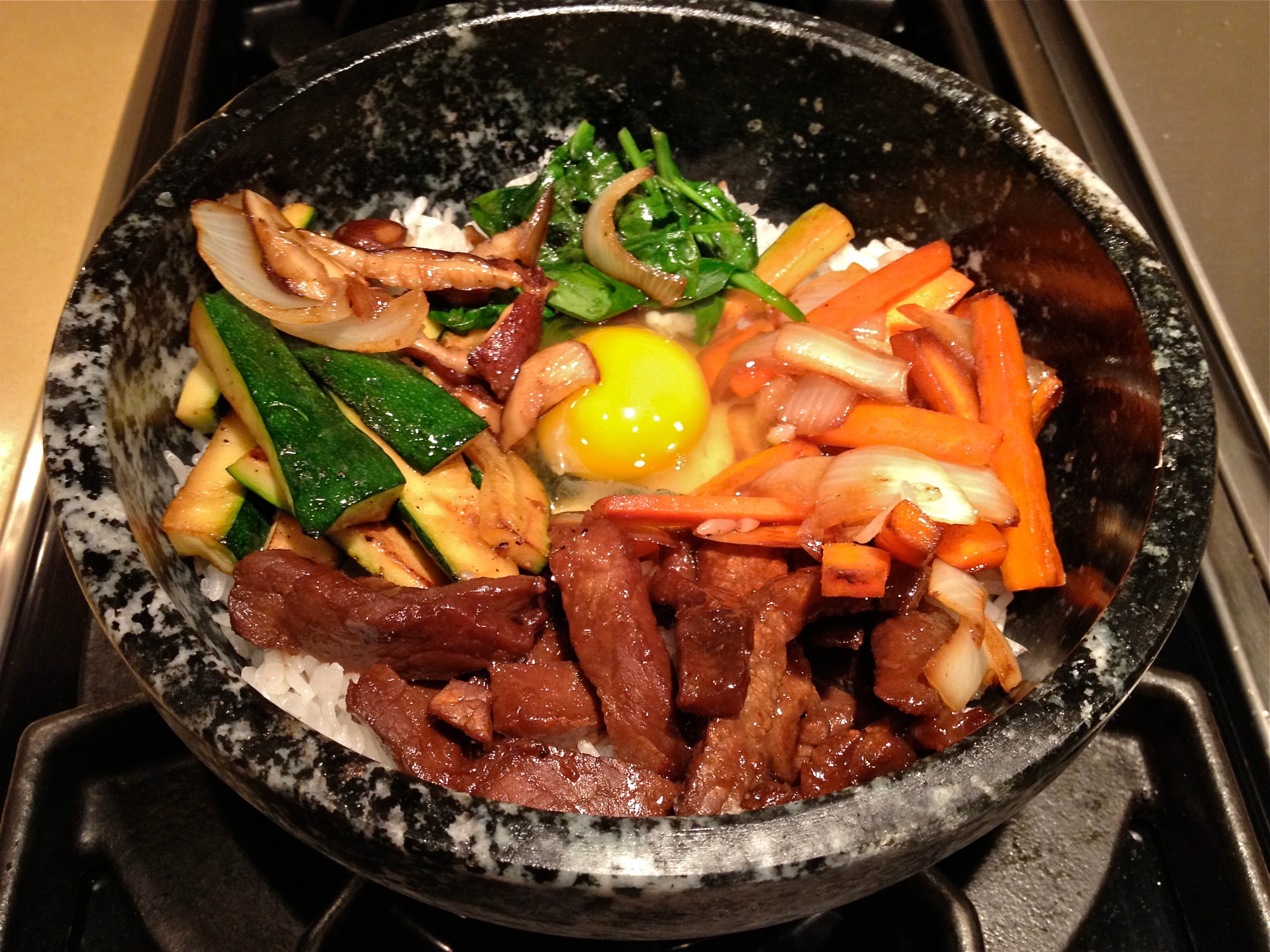 How to eat bibimbap is a question I get asked quite often, and in the past I have been embarrassed to reply that I don’t actually know.

Bibimbap, in case you hadn’t realised by now, is a signature Korean dish. The word literally means “mixed rice”. Bibimbap is served as a bowl of warm white rice topped with namul (sautéed and seasoned vegetables) and gochujang (chili pepper paste). A raw or fried egg and sliced meat (usually beef) are common additions. The hot dish is stirred together thoroughly just before eating.

Vegetables commonly used in bibimbap include julienned cucumber, daikon, and mushrooms, as well as spinach, and soybean sprouts. Tofu (known in Korea as Dubu) or a leaf of lettuce may be added, or chicken or various forms of seafood may be substituted for beef. For visual appeal, the vegetables are often placed so adjacent colors complement each other.

Check out this recipe and set of instructions from My Korean Kitchen to learn how to make your own Bibimbap.

I don’t think it matters in which order you put the rice or the vegetables, as it all gets mixed up anyway. That’s the whole point. Then the raw egg can be cracked onto the surface of it all, and then the gochujang is added which is the interesting part, as it adds a lot of flavour to the dish, so go easy on it if you still want to taste the rest of the bowl! Mix everything together competently and then sit back and enjoy your taste of Korea!

The first time I tried bibimbap, I didn’t really have any real instructions (it was actually on a flight to Seoul from Hong Kong), and the air stewardesses did their best to tell me what to do, but it all got lost in translations, and they actually giggled at me politely as they saw this idiotic Englishman experiment with their national dish!

A slight alternative to the usual dish is Dolsot Bibimbap. This kind is always served in traditional stone bowls, which adds to the atmosphere and excitement when you are eating it. This makes the dish seem even more Korean, and quite unlike anything I had eaten from in the past, having been used to china plates or paper boxes in the western fast food culture.

Wherever you go in Korea, and whatever your budget, you can be sure to find thousands of bibimbap restaurants lining the streets (some with better reputations than others, I might add!), and you don’t usually need a reservation on regular days to eat in these restaurants. If dining in is not your thing, then you can usually find bibimbap-to-go in convenience stores and in small fast food outlets, which may not be very authentic, but I guess it’s still healthier than a potato hot dog!

4 thoughts on “Bibimbap, and how to eat it”