Bayon is one of the most famous temples within the Angkor Archaeological Park. You may know it as the temple with the many faces. Bayon was built in the late 12th or early 13th century, as the official state temple of the Mahayana Buddhist King Jayavarman VII. It stands as part of the capital of Jayavarman’s empire, Angkor Thom. Following his death, Bayon was modified by other rulers, in accordance to their own religious beliefs. A striking feature of Bayon is the many huge stone faces that are carved from the rock on the upper terrace of the temple. These features have led the people in charge of preserving the site (a Japanese Government consortium) to state that Bayon is “a prime example of Baroque Khmer architecture”, and this appears in stark contrast to the classical Khmer architecture of its more famous cousin, Angkor Wat. 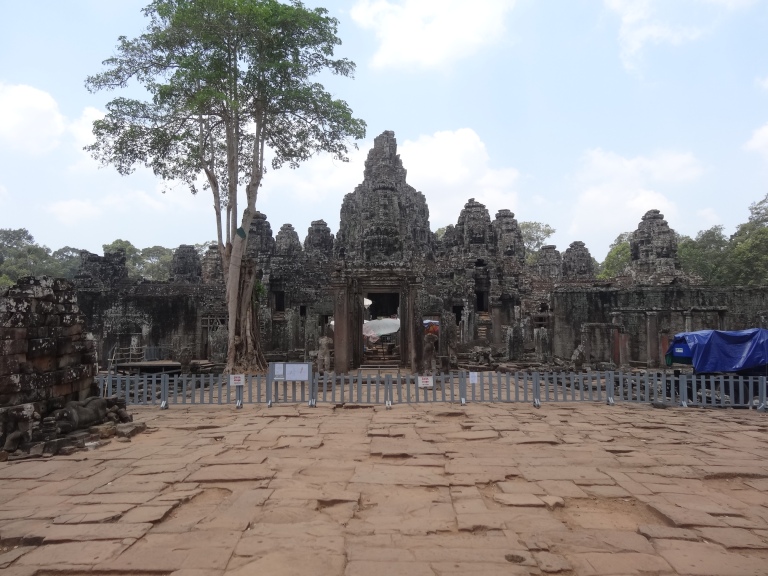 I visited Bayon on my first full day in Siem Reap, albeit after I had first explored Angkor Wat itself. I arrived at Bayon via Tuktuk and almost immediately saw a large monkey prowling around the road and the entrance to the temple. I was very wary of this monkey as it seemed to be stalking me. I put my camera away zipped into my pocket in case the monkey tried to snatch it from me, although when I was through the first doorway into the temple itself I was able to begin taking some cool photos. After the monkey, my next encounter was with a young Khmer man, who was waiting inside the temple, and he advised me that if I stood in a certain exact spot near him I could get a brilliant photo of the temple architecture above. I said I would come back later to take these photos, as I think he may have tried to charge me for the privilege. 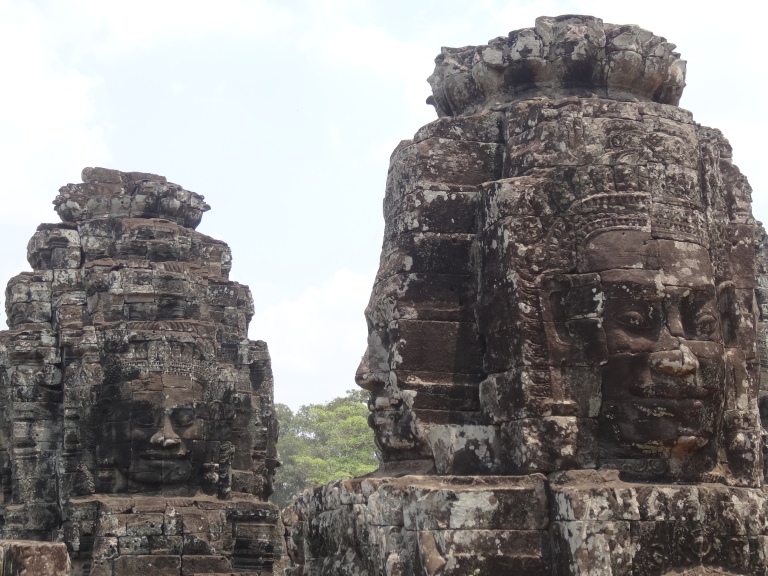 You can see from my video tour embedded at the bottom of this page that there are steep makeshift stairs leading up from the ground floor of the temples to its upper reaches. It is here where you can marvel at the incredible faces that have been intricately carved from the rock, around 3 or 4 of which dominate each of the 37 towers sporadically placed around the temple. These faces (and they number over 200) are claimed to be portraits of Lokesvara – a bodhisattva who embodies the compassion of all Buddhas.

Probably even more so than at Angkor Wat, I found myself to be intrigued by the architecture here at Bayon, and I don’t mean just the faces. There are many little intricate carvings on the walls, both on the lower levels and up above. I also liked the fact that, unlike Ta Prohm and Preah Khan whose majesties have been somewhat claimed by the power of the jungle, Bayon still has a comprehendible design that can be explored logically. This certainly makes me feel Bayon is a true temple (albeit decrepit), rather than needing to refer to it merely as “ruins”.

Thanks for reading! I hope I have inspired you to visit Bayon temple if you are ever in the Siem Reap area. Alongside Angkor Wat and Ta Prohm, it is one of the three essential sites of the Angkor Archaeological Park. There is already a wealth of information online about Bayon temple which is easily accessible to you, but I would recommend taking a look at this gallery of awesome photos by Maika Anthoni, and getting to know the temple a little better in this great blog from Scarlet Scribs.

Finally, please check out my own personal video tour of Bayon in the video embedded below:

8 thoughts on “Bayon: The Temple of Many Faces”